My dear mother has been in a home for a year and in the past few weeks her condition has deteriorated. She is being pushed further and further by her degenerative condition. We know she isn't in pain, we know she is being cared for but this is bad time for her and all the family, some of who are half way around the world.

After a few stressful weeks, last weekend we headed out to enjoy the sun in our old camper. It's not hard to find somewhere pretty to spend a few days in our part of the world. The first night we stayed a night in a car park near this lovely beach!


The second day we had a very pleasant day and night on a sweet little campsite near Cambridge, we headed into town for a bit of day out, and bang! No clutch or gear box. We waited for half the day to be carted home, for the princely sum of £250. Our inferior pirate rip-off version of rescue cover had a clause which meant we get recovery but only within a 10 mile radius! We were 70 miles away. Be warned people. Stick with The AA or check your cover. Anyway, it's an old van but we love having it, so even though it will cost a fortune I really can't see us scraping it yet.

On a bright note, I just collected my sewing course portfolio from college. The course finished in January but we didn't get marked until last week which was rather tedious. My favourite tutor comment on my rather madcap final project was that I seemed to be "pushing out in all directions". Yes, what a perfect way to put it. For some reason my idea was to print my own fabric and then make something out of it. It wasn't exactly hard but it took ages with lots of mind changing and experimenting throughout. The design, the colours, the fabric, the construction, the pattern, closures, basically everything! Well, why not.

Anyway after all that time and effort the good thing is I do still really like it. The bodice is Hazel by Colette, which I didn't have to do any adjustments to as they draft everything for a C cup. I was using a thick cotton (which works better for the printing) so I didn't want a gathered skirt. I drafted an A-line skirt but couldn't get the fit right so I used the top part of the skirt as a peplum. Well, it certainly is unique.

I have to be quite nifty about getting into it as it doesn't have a zip. I do up the buttons all the way up the front and swivel it round and pop my arms through the straps. I am so pleased it still fits me even though i have put on a half stone since I finished it. Hope it stays hot so I can get it out and used!

My mother was my first sewing teacher and excelled at everything, sewing, knitting, home making and as a nurse. She encouraged us her children to be our true selves and she was quietly but unrelentingly supportive. She would have looked at this top with some amusement but made some kind remarks while not quite hiding her puzzlement - it's really not her kind of thing. She is the source and biggest influence in my character, and even though at such a low point she is still my greatest source of strength.

It's not sewing weather at all, but I had a two day course booked this week which fell on the two hottest days of the year so far. Luckily the process I learned was pretty darned hot too, well I think so.

Moulage is something I have wanted to learn for a long time. It's usually hard to find a course and if you find it, it can be pricey.

First let me say since starting sewing courses last April my output has been quite poor. The past year and a bit has been all been about input not output - learning but not producing much. That could feel like I was wasting my time, but quite the opposite. Spending two days learning to design the way designers do feels pretty amazing. Moulage is designing with fabric, it's a great process and having tried it I am slightly awed by it.

Advantages: It's actually quite a simple idea. Get some fabric, pins and a model and dive into a liberatingly creative process. In Moulage you work in 3D. You can pull and manipulate your fabric in ways that a 2D patterns would be hard pressed to match. When people think Moulage they think drape. 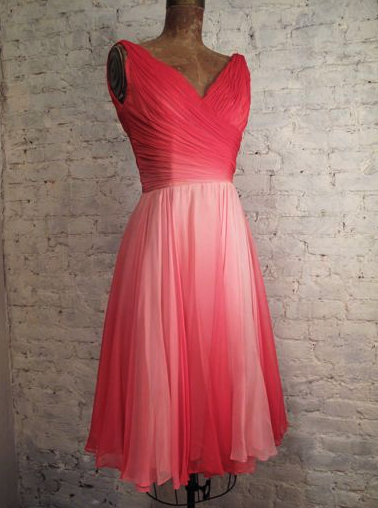 But Moulage can be used to make all manner of garments simple or complex. And you don't have to stop at the design stage, you can even sew the dress together directly on the model! If your design is really complicated and covered in pleats that would really make sense.

Disadvantages:
A good knowledge of sewing is useful but one of the girls on my course had only been sewing a few months and she did good. You don't have to know a great deal but you do need to understand something about patterns, matching up your seams, grain lines etc. The thing that really puts people off is that you do need an accurate model of yourself to work on. But again, that is not an impossible obstacle. You can pick up a tailor's dummy second hand and adapt it as needed. I have done it and will post about my dummy double another time.

Here's a brief description of the Moulage process I did in my class.

I was one of two people in the class to work in calico! The other students were all working in their final fashion fabric (a different process described at the end). Using calico makes it simpler to experiment with shapes, but you don't necessarily get the same drape you would from your final fabric, which is something I found frustrating. Anyway, I did a calico draft, turned that into a paper pattern, refined it and then transferred from paper back to cloth to make a toile for fitting.

The model or dummy is adjusted to size. After pinning some tape for guides (best in a dark colour but we had white) to mark the waist, the hips and shoulder lines, I cut the calico to size and got to work with the pins! You can work with one large piece of fabric or smaller pieces. I used a few rectangles of varied sizes, three for a gathered bodice front and midriff and two pieces on the back.

I used a pen to trace where the stitching would be. For this project I marked only one half, as both sides of the bodice are the same. Mark along all seams and along the centre fold of the midriff and all the pleats and other details. Use balance marks (seen here on the pleats) to make sure you can match things up. I worked with all my pieces on the straight grain, but if you are off grain remember to mark up your grain lines.

I took the fabric off the dummy and created a flat pattern from it. On this pic you can see the back bodice, and how it looks after being folded and pinned and marked on the dummy. It's basically just a sketch done in 3D, and a messy looking one at that. After tracing it out onto paper using a tracing wheel, I drew over the lines with a pen and added an inch seam allowance. The idea is to produce nice clear lines (especially stitching lines) which are important later when making final fitting adjustments.

I used the paper pattern to make a test garment for sewing up, tracing off the paper pattern onto some new fabric. See that lethal tracing wheel? It is the MOTHER of all wheels, I swear it would trace through steel. Look carefully you will see the neat holes it makes through two layers of calico fabric, it's a dream and I NEED one of my own (this was borrowed).


Finally I drew over all my stitch lines and pinned and matched them all to ensure they were accurately meeting up before sewing.


All that drawing is well worth it, they make stitching together easier and I can see where I need to make changes. I like the pleat design a lot, it would work well in some cotton voile I think. I need to think about the whole arm area, perhaps I will  cut off more fabric and go sleeveless, it's a bit unbalanced. Anyway, after all that this garment needs to be re-pinned on my own model to make it the right size for me, and it needs quite a lot more work design wise. But as a first attempt I am really happy with it.


Most of my fellow students worked using fashion fabric. As you can see below you don't even need to cut the fabric at all! The arm holes are marked with pins. They just wrapped the whole length of fabric around the dummy and pinned it into shape with side seams, darts and all. Then rather than using a pen to mark out your darts and seams, use a series of long tacking stitches. The tacking stitches are all you have to go by when you take it off the dummy, so you need lots of them along all the stitch lines (a bit of a pain if you hate tacking). Using different colours for different stitching lines is useful. You can transfer the design to a paper pattern if you like, to refine it or to copy it for future use - some people did, some didn't. Once you are happy cut out the fabric version, and stitch it up using your tacking as a guide!

Sue made a sheath dress which had long french darts and shoulder darts. After she got over the hours of tacking she was really amazed by the whole process, and her dress was incredibly wearable and of course fitted her perfectly (her dummy is very close to her size as you can see). 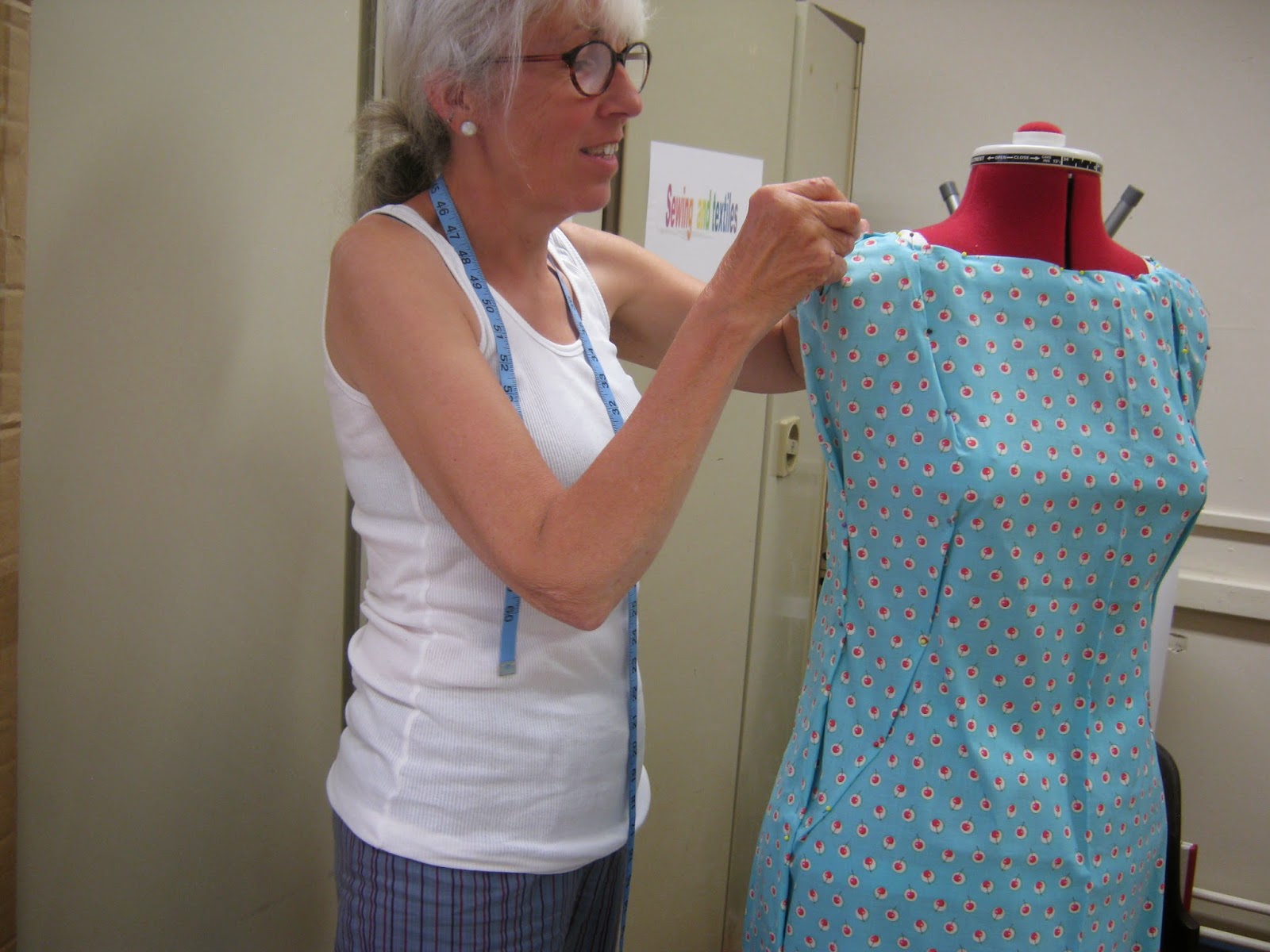 Sharon made a dress in pretty pink linen with a gathered boat neck line and lovely long tuck pleats to the front. It's a really elegant and classic design don't you think? That's Sharon all over! 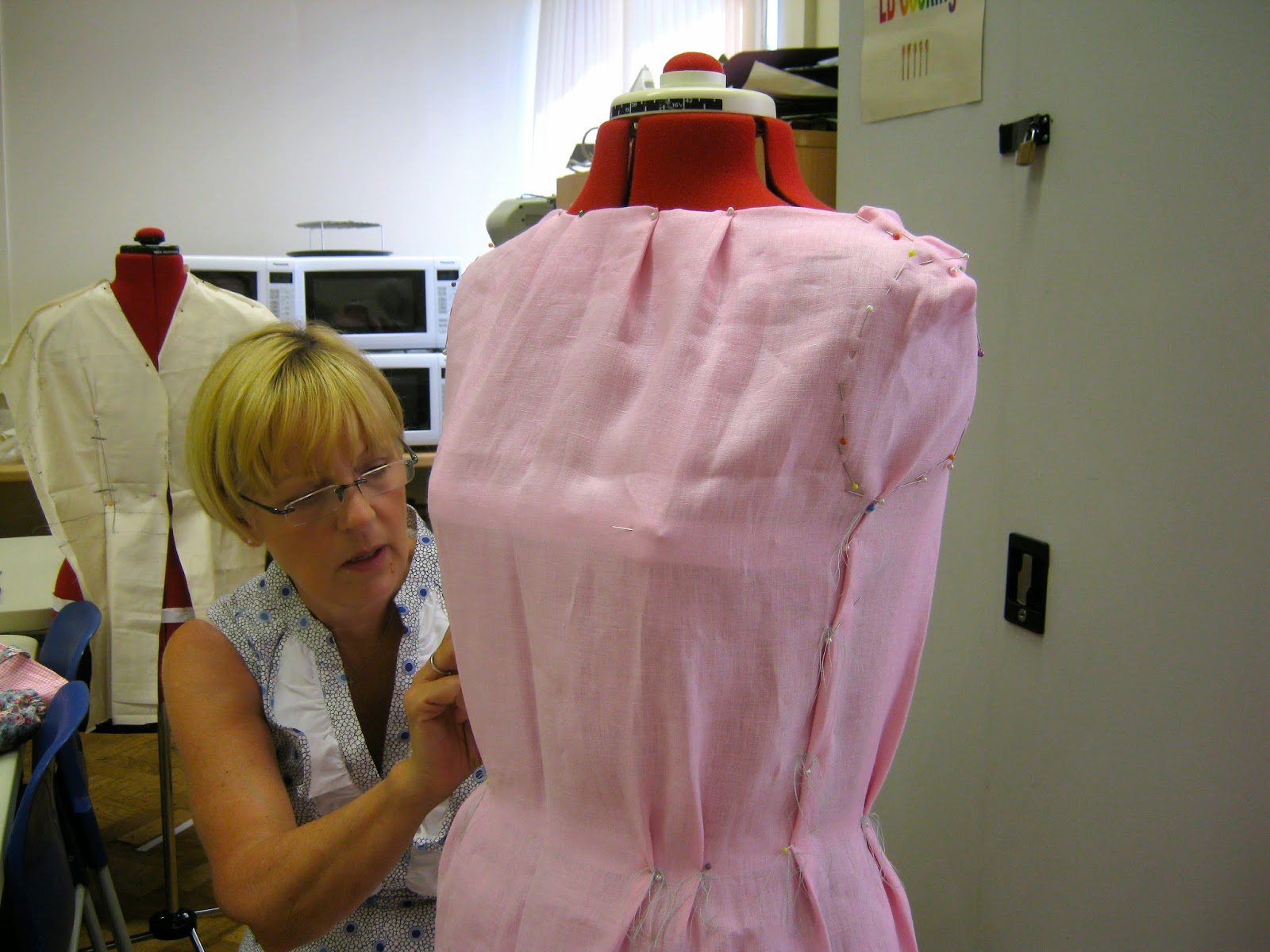 And there you have it, the wonderful world of Moulage.
Now I need to have a break from all this learning and actually go and make something.

When the sunshine has gone again that is.