Earlier this year someone offered me some sewing work on a film shoot, it was a student film but it was pretty cool. I was sewing 10 hours a day for three days, it was all simple stuff but against the clock. I was a flurry of hands, scissors, cloth and I loved every minute. It felt like being on the Great British Sewing Bee. One of things that pleased me most was my collection of precious sewing scissors all proved indispensable. When my serrated shears (£50 to replace) went missing for half a day of the project I was beside myself, but they re-appeared thankfully.

Anyway, sewing against the clock was productive. I usually indulge my vintage sewing habits with tracing, fitting, muslin making, re-sizing, and more tracing before actually making stuff. It's the only way I have ever done it so I never thought much about it. After the speed-sewing trip I felt the need to remove some of that faffing about. And here is the result.

Green on the green in Cambridge.


The fabric for this project was a jungle/floral pattern, probably 1960s. It was 3 metres long but only just worked out to be enough. The Blackmore pattern is probably late 50s or early 60s. The total cost for both fabric and pattern was £2.

I always do a muslin for a fitted bodice, but this was not quick enough, so instead I used a tracing off the Emery pattern from last year, and compared it to the bodice of this pattern. I adjusted the shoulders and the back bodice, both of which were shortened by half an inch or so. I think I also changed the back bodice dart. It took all of 10 minutes.


The cummerbund was a bit of a different story, but I had this piece of fab chartreuse fabric in my off-cuts stash and it's such a nice match. The amazing Laurien describes how to make this simple belt. It's made from two pieces of bias fabric cut to fit your waist exactly, you rely on the bias cut to make it comfortable. There are two pieces of boning at the left and right waists, which you have to gather the fabric around (quite fiddly) and finish it with hooks and eyes. My belt is thinner than it should be due to lack of fabric, and I think I should have added some stiffening as it's too soft and it rides up. I do like the effect though, and it's more comfortable than a belt so I think I will be making more of these.

I put in my standard lapped zipper, then finished with a machine hem. All done in a jiffy and pretty satisfactory. In fairness, this faff-free approach to a fitted bodice is only possible if you have done a similar one and the adjustments are directly transferable. But there's going to be a bit more speed sewing this year.

But for now now I'm going back to my first ever trouser project - which is now on it's 4th muslin. On with the faffing! 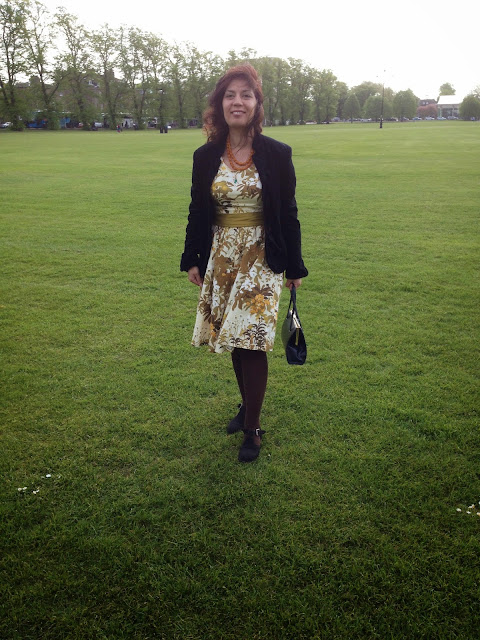